In this article, we will install Win95 with Fusion software, which allows you to run virtual machines on Apple Mac computers.

How to Run Windows 95 on VMware Fusion Pro

Microsoft introduced the Win95 operating system on August 24, 1995, and put on the market.

Microsoft Win95 system was the first system to be visually developed, and Microsoft significantly was improved its user interface. For the first time with the Win95, the Taskbar was developed. In addition, the taskbar and long file name support were enhanced.

The ideal way to setup and use the Windows OS again is to use a virtualization program such as VMware Workstation or Oracle VM VirtualBox.

In our previous tutorials, we reviewed the Win95 setup on a Windows OS. You can find it here: How to Run Win95 on VMware Workstation.

In this article, we will setup the Microsoft Win95 operating system using VMware Fusion Pro on an Apple Mac computer.

You can access Windows operating systems setups with VMware Fusion 10/11 Pro from the following links;

You can also install the above-mentioned Windows operating systems by watching videos on our YouTube channel. You can access this videos from the following links;

How to Install Windows 95 on macOS ⇒ Video

You can watch the video below to install the Microsoft Windows 95 operating system using the Fusion virtualization program on macOS High Sierra 10.13 and also subscribe to our YouTube channel to support us. 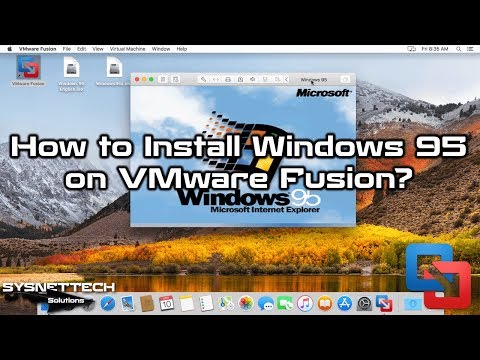 In this article, we have created a virtual machine with a VM Fusion Pro virtualization program on a Mac computer and then install the Microsoft Win95 system. Thanks for following us!